Nokian Hakkapeliitta 8 in a struggle with nature

When the new Nokian Hakkapeliitta 8 from Nokian Tyres proved its might on the ice of the Bothnian Bay, in unforgiving Northern winter weather, it already had thousands of hours of product development behind it. But it still took hundreds of hours of professional work and dedication against the ice, snow, and wind, before the new record for driving on ice was set at 335.713 km/h (208.602 mph).

The hunt for the world record is ready to begin, and the icy Bothnian Bay seems to have a mind of its own at the base of the Gulf of Bothnia. Not even the Nokian Tyres test team can affect it. The place, car, and driver are the same as two years ago. The Nokian Hakkapeliitta 8, the new high-technology product from Nokian Tyres, is the new kid on the block.

The southern wind presses on the ice from below, and salty water gushes through the small gaps even though the temperature is nearly ten degrees below zero.

- This is what we are here for – extreme conditions. We cannot change how nature works. But these are the optimal conditions for a tyre test. When we take the tyre to its extreme limits and speeds, we can collect a lot of new information concerning its characteristics, says Matti Morri, Technical Customer Service Manager for Nokian Tyres, who is here to help the Nokian Tyres flagship product, the Nokian Hakkapeliitta 8 studded tyre (255/35R20 97 T XL) towards a new speed record.

Nature meets high-tech on the ice of the Bothnian Bay, near the city of Oulu. The chilly ice, wind, and snowfall greet the hot-blooded Audi RS6, with its nearly 1,000 horsepower, and Janne Laitinen, Nokian Tyre’s cool and collected test driver.

Skipper Laitinen takes the wheel of the Audi; riding shotgun with him is Automotive Laboratory Technician Arto Lehtonen from the Oulu University of Applied Sciences, who has a laptop on his lap.  His duty during this test run is to monitor the functionality of the car by tapping to the different probes installed on it. In the actual world record attempt, however, the car will only be controlled by the “Iceman” Janne Laitinen.

- This car is equipped with a GPS that gives us the actual speed information 20 times per second. Each of the wheels has a speed sensor that allows us to calculate the amount of slip, says Lehtonen, a laboratory technician with years of experience in the high-end testing of cars.

Grip at the extreme limits

When the speed of the car exceeds 300 km/h, precise handling, quick steering response and best possible grip take centre stage. Longitudinal and lateral grip are both important, but they also need to be well balanced. Engine power is less important at these speeds. This is very obvious to Laitinen, who has been involved in the product development of the Hakkapeliitta 8 since the beginning.

- The thing with Hakkapeliitta 8 is that it has much better stability than other tyres, and more advanced grip. It is also supreme on bare roads, says Laitinen while putting on his helmet.

The Nokian Tyres test vehicle, an Audi RS6, has had its suspension modified, and its engine has been tuned for peak power by modifying the exhaust system and engine management.

The studs of the Hakkapeliittas push the enormous power onto the ice. The dashboard of the Audi has eight LEDs that indicate the grip of the tyres at five per cent intervals. There is grip, but nature is not yet ready for a record; we need to wait for the right moment.

It’s all in the feel

A few weeks have passed since the previous record attempt. The action at the pit stop set up by the seaside is at least as hectic as that of the fish swimming under the spring ice. Everyone and everything has its purpose – tyres as well. They must rise to the occasion, and at speeds of over 300 km/h, this is equal to climbing to the top of a vertical iceberg.

Laboratory technician Lehtonen is busy analysing the data from the morning’s test runs on his PC. Grip is now of the essence.

The ice track is finally suitable for the record attempt; it is a straight line that is 12 kilometres long and up to 18 metres wide. The temperature is nearly minus 16 degrees, and even the wind seems to be calming down.

- You might think that the sea ice is like a table surface, but in fact it is bumpy and tends to move from day to day, says Technical Customer Service Manager Morri.

Pedal to the metal

The wind only reaches one metre per second, as Laitinen presses the Audi’s accelerator towards the surface of the ice. On the shore, we can only see a cloud of snow as the tyres grip the ice and carry the car to an average speed of over 330 km/h (205 mph) on both the down-wind and upwind sections.

It is already afternoon and the side wind is growing, but Iceman Laitinen wants to do a few more runs. The digits on the speedometer approach the magical 340 km/h (211 mph) limit.

The blue Audi sounds almost like a landing aircraft as it flies past the photocell on the straight ice track. The two-way radio comes to life.

- What was the speed?

- It’s a new world record! The test was performed according to the regulations. We will now do some further verifications, signals Simo R. Lampinen, the rally legend who works as the official supervisor of the record attempt.

The anticipation on the ice turns to spontaneous displays of joy. Test driver Laitinen is happy to hear that a new world record of 335.713 km/h (208.602 mph) has been made.

- It was by no means easy. The important thing was to transfer all the power into the ice with the tyres. We were able to do that, even though the bumps did disturb the grip quite a bit. In fact, there was still some room to increase speed but, today, the ice was too bouncy. 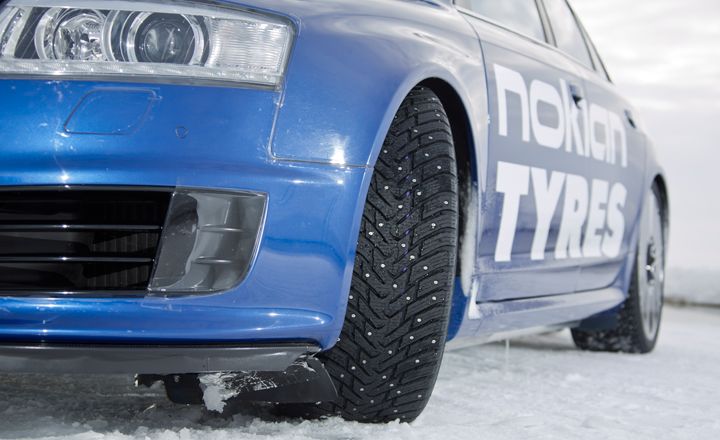