The new world record for fastest tractor was achieved when Nokian Tyres and Valtra combined their northern expertise. The new amazing record was set on a snowy and icy road in Finnish Lapland. Multiple World Rally Champion Juha Kankkunen kept his head cool and drove the machine at a speed of 130.165 km/h (80.88mph). Breaking the record was made possible by the world’s first winter tyre for tractors, the Nokian Hakkapeliitta TRI (440/80R28 151D & 540/80R38 167D) and the Valtra T234. 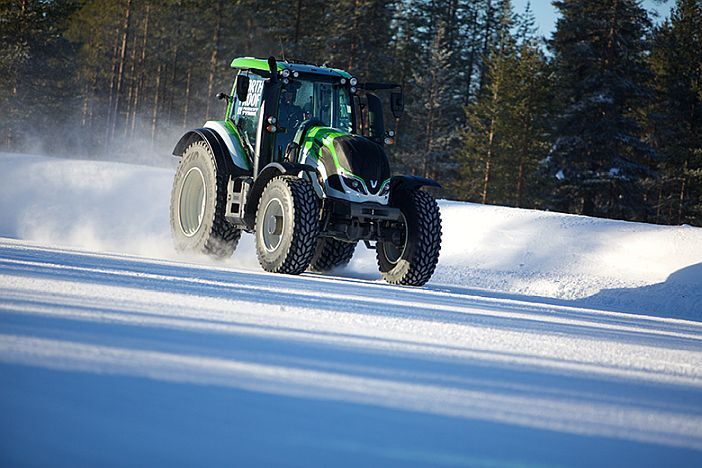 - I have done top speed tests earlier with several cars. This was the first time with a tractor, and we immediately got a world record! The tyres and tractor worked really well, even though the weather was challenging, says Juha Kankkunen.

In 2013 Nokian Tyres, inventor of the winter tyre, achieved a world record for the fastest car on ice, as test driver Janne Laitinen from Nokian Tyres drove at a speed of 335.713 km/h (208.602 mph) on the ice of the Gulf of Bothnia. Grip and speed like never before were ensured by the top product, the Nokian Hakkapeliitta 8 studded winter tyre.

Top performance on ice and snow

Nokian Tyres expanded its versatile winter tyre selection to tractors when the Nokian Hakkapeliitta TRI was launched in the spring of 2014. The Hakkapeliitta TRI’s unique tread pattern, winter rubber compound and siping maximise grip and traction. The diagonal siping creates grooves on the tread blocks, increasing the number of edges that grip the driving surface and improving longitudinal and lateral grip. The world’s northernmost tyre manufacturer was the first to introduce block pattern tyres for tractors over 10 years ago.

- Testing at the extremes is at the core of activities and it requires unique skill. We wanted to show the true performance of the new Nokian Hakkapeliitta TRI. It is quite a remarkable sight when you see a 7.7-ton machine flying past at over 130 km/h with a quadruple World Rally Champion behind the wheel! When a tractor is driven that fast on a winter road, it requires great grip, stability and handling properties. These have been our targets during the development of the Nokian Hakkapeliitta TRI, says Tero Saari, Project Manager, R&D for Nokian Tyres.

The record took place on 19 February 2015 on the emergency airfield of Vuojärvi, Finland, approximately 20 kilometres from the city of Sodankylä towards Rovaniemi. The total length of the packed snow strip was approx. 2,300 metres, and a 50-metre speed trap was set at the middle of the strip.

The Guinness World Records organisation defines specific rules for the world record for fastest tractor. The time for the tractor to travel through the 50-metre speed trap is measured in both directions. The world record is an average of these two measurements. The tractor took a flying start.

The master of extreme conditions

Nokian Tyres is the world’s northernmost tyre manufacturer. The company developed and manufactured the world’s first winter tyre for the winter frost in 1934. Two years later, the Nokian Hakkapeliitta was born in the Nordic winter; it is already a legend wherever true winter conditions are known. The unique innovations have made the Hakkapeliittas the winners of magazine tests year after year and decade after decade.

Since the beginning, careful testing and development by Nokian Tyres has been leading the way towards safer and eco-friendlier tyres. Far north of the Arctic Circle, Nokian Tyres has its enormous Ivalo Testing Center, also known as “White Hell”, spanning over 700 hectares. Winter tyres are put to the test in extreme conditions around the clock.

The company is the only tyre manufacturer in the world focusing on products and services that facilitate safe transport in Northern conditions. Its innovative tyres for passenger cars, trucks and heavy machinery are mainly marketed in areas that are home to snow, forest, and demanding driving conditions due to changing seasons.

See videos and read more about the world record for fastest tractor
www.nokiantyres.com/FastestTractor2015

How the world’s first winter tyre was invented
www.nokiantyres.com/first-winter-tyres