Environmental awareness among drivers increased and eco-friendliness became an integrated part of the company strategy. Nokia Renkaat was the first tyre factory in the world to acquire the BS 7750 environmental certificate, and it also joined Rengaskierrätys Oy, which manages the recycling of used tyres in Finland.

During the early recession years of the 1990s, the company focused on its special competences, that is, winter tyres and forestry tyres. After the recession, exports boosted sales and the tyre factory was expanded on several occasions. The company’s own distribution network extended to Sweden and Latvia. Over 10,000 tyres per day were being manufactured in Nokia.

In 1989, the Nokia group had divested footwear production and technical rubber products. Nokia Renkaat Oy continued as part of the basic industry business unit. In 1995, the tyre company returned to its roots as an independent public company and was listed in the Helsinki stock exchange as Nokian Tyres Plc.

At the end of the decade, Nokian Tyres unified its distribution chain into the Vianor concept, which became the largest tyre retail chain in the Nordics. Over one million passenger car or van tyres were sold each year. The Vianor tyre retail chain operates in all markets that are strategically important for Nokian Tyres. In addition to tyre sales, Vianor offers tyre changes and fitting as well as car service and tyre storage.

Studs wear out asphalt, which is already under heavy stress under Northern conditions. This fact was used as a justification by many who had a critical opinion towards studs, all the way from the discussions in the 1960s. Nokian Tyres, not content with merely pondering the situation, took steps to find solutions that would generate less wear. One of the more far-reaching innovations was the Eco Stud System launched in 1995. The light, spring-like stud was located inside a locking stud hole, biting into the road exactly when needed. According to VTT Technical Research Centre of Finland, the Eco Stud produced 30 per cent less asphalt wear than traditional stud technology. This was an important step towards a more eco-friendly winter tyre.

Image: The key concept behind the Eco Stud System technology used in Hakkapeliitta winter tyres is the stud cushion that makes stud operation more effective and dampens its impact with the road. 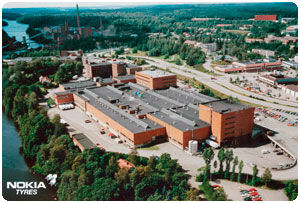 The environmental protection goals of a tyre factory involve three areas: energy consumption, generated emissions and the amount of waste. Emissions of solvents used in tyre manufacturing were reduced by building a catalytic incineration plant, as well as by means of product development. During the 1990s, solvent emissions were reduced to less than half of the original amount. In 1997, the crushing of rubber waste in the Koukkujärvi storage area was started, and soon afterwards, waste rubber was routed for reuse directly from the factory.

Environmental expertise also means contracts and openness. Nokian Tyres published its first environmental report in 1997 and it received an award in the comparison conducted by Ympäristötiedotuksen Seura. The same year, Nokian Tyres was the first tyre company to join the EU’s Eco Management and Audit Scheme system. At the end of the 1990s, the company took part in the development of the criteria for the eco label for tyre products. At the same time, Nokian Tyres adopted a lifecycle approach to environmental protection. The company takes responsibility for the environmental effects of its products throughout their lifespan. 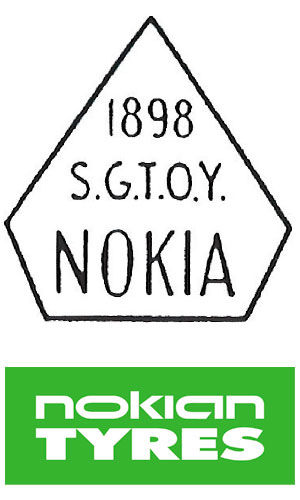 Suomen Gummitehdas Osakeyhtiö opened its own sales office in Helsinki in 1900. The most famous location was on Mikonkatu, where even queues formed during the shortage years.

In the beginning, car tyres were sold through hardware shops and car dealers. Some rubber workshops also joined in as contract resellers. From the end of the 1950s onwards, specialist tyre shops took over the sale of tyres. At the same time, the activities of the entire tyre department developed a strong sales focus. Tyre salesmen all around the country were an important link between the factory and the consumers.

Tyre retail sales became more international, as Nokia Renkaat purchased several Norwegian tyre retailers at the turn of the 1990s. At the end of the decade, retail sales were unified under the Vianor chain, which quickly expanded to Sweden and Russia. In the 2000s, the main markets for Vianor are in the Nokian Tyres growth areas: the Nordic countries, Russia and the CIS countries, North America and Central and Eastern Europe. In the summer of 2011, Vianor opened its 800th retail outlet, entering the Italian market at the same time. Currently, Vianor operates in over 25 countries. The sales operations that started from display windows and tyre salesmen has grown into a global and expanding full-service chain that focuses on cars and tyre services.

Image (below): The 800th Vianor retail outlet opened in Montebelluna, Italy, in 2011.