In product development, research and testing have played a key role throughout the history of Nokian Tyres. Expertise, relentless work, and persistence combined with a search for entirely new solutions have been defining features, both in the laboratories and on the test tracks.

The Suomen Gummitehdas laboratory was established in 1920, at the initiative of technical director Antti Ahtero. Gustaf Komppa, one of the leading chemists in Finland, was also part of the factory board of directors. The facility located in Helsinki later became the Keskuskumilaboratorio (Central Rubber Laboratory) that researched raw materials and developed compounds for all the fields of business at Gummitehdas.

The tyre department also conducted in-house research. Manufactured tyres were actively tested by bus lines, such as the Paunu service between Tampere and Nokia, and the service to Helsinki of Leino & Kumppani. Taxi drivers were also used as test drivers for tyres.

Research activities at Gummitehdas further developed especially during the exceptional conditions of World War II, with research conducted in the fields of domestic synthetic compounds and rubber dandelion cultivation.

Wonders of the tyre laboratory

In the 1960s, new winter tyre innovations increased the need for test driving. Taxi drivers from Tampere were used to test the durability of studs. In total, professional drivers completed over fifteen million kilometres per year in monitored field tests using tyres from Nokia. The cars were inspected once a month and the drivers were interviewed at the same time.

The tyre factory gained its own R&D department in September 1969. The tyre laboratory invested in three-slot testing machines that could be used to measure rolling resistance or rim attachment up to a speed of 250 kilometres per hour.

The winter characteristics of Hakkapeliittas were measured on the 1.2-kilometre ice track on Alisenjärvi in Nokia, which was completed in 1968. The measurements were made using Peiseler equipment, but the car types varied.

The next year, the company acquired and hired its own cars and drivers. Two Saab 99 passenger cars drove approximately 1,300 kilometres per day, in two shifts. The first driving crew consisted of Pertti Niikkonen, Jaakko Aho, Matti Puuska, and Jarmo Takkinen. A total of 400,000 kilometres were accumulated each year until October 1970 when the cars were replaced by Volvos. The Tyre test sign became a familiar sight in Nokia. Currently, the Nokia testing centre is the heart  of  summer tyre product development. On the Nokia, company simulates almost all driving situations on northern roads. Demanding conditions are sought around the world, when necessary. Tests for the UHP tyres intended for high-speed driving are performed on test tracks abroad.

Friction tyres were on the upswing internationally at the end of the 1970s. Locations for testing the Hakkapeliittas in winter conditions were sought all over the country. In 1986, the company founded its own, fixed testing centre in Ivalo, north of the Arctic Circle, where R&D and testing teams as well as test divers put tyres  to a trial with the task of separating the best tyres out of a good selection. The company is the world's leading expert in northern conditions especially due to the comprehensive and careful testing performed in Lapland.

The centre, which has expanded to over 700 hectares, is used for demanding winter testing from October to May.

The increasingly varying winter conditions required the further development of the test methods. The new generation of Hakkapeliittas underwent slush planing tests, for example, which Nokian Tyres was the first in the world to introduce in 1996.

Developing tyres requires careful, focused planning. Different markets require their own tailored products and precision innovations. Markets and consumer groups are becoming increasingly fractured. Product development carefully follows the movements and changes of consumer needs, and tries to anticipate user wishes. The market can be convinced by offering products that have been carefully tailored for different uses and that have passed strict testing requirements.

Nokian Tyres uses about half of its R&D costs on testing products. Sufficient test results cannot be achieved under laboratory conditions alone. Therefore, Nokian Tyres tests its products under authentic conditions around the world in order to make them work flawlessly under difficult, demanding and varying conditions.

Its own test laboratory in Ivalo, Finnish Lapland, develops test winner tyres that consumers around the world can rely on. Test winners are created through high-class expertise and millions of test kilometres. 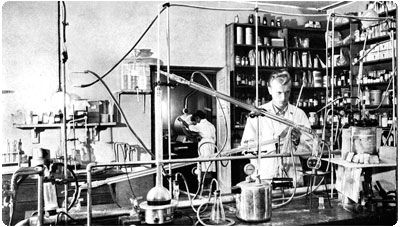 During the war years, the company's Savio factory established a raw materials laboratory for developing synthetic rubber compounds. The facility moved to Helsinki in 1949. The entire laboratory moved to Nokia in 1975, now under the name of Oy Nokia Ab Kumiteollisuus development centre. For the Hakkapeliittas, the laboratory was responsible for basic physical and chemical research, whereas the actual product development was done by the tyre department. From the 1960s onwards, tyre technology developed rapidly, and Nokia invested 3 to 4 per cent of its turnover into R&D.

Nowadays, Nokian Tyres lays strong emphasis on product development, and the share of new products is at least 25% of turnover. The development of an entirely new Hakkapeliitta tyre takes 2 to 4 years.

Image: Building a tyre involves chemistry and physics. Researchers in the Helsinki central rubber laboratory in the 1940s.

To reduce the material shortage during the war, Finland tried to extract domestic natural rubber from rubber dandelions (Taraxacum kok-saghyz).

The cultivation test that started in the summer of 1943 was led by Professor Otto Valle from the Maatalouskoelaitos agricultural experiments laboratory in Tikkurila and plantations of 1 to 10 acres were located across the country. Even Nokia had its own dandelion plantation. The extracted rubber was compared to natural rubber from tropical areas in the Savio factory laboratory. The quality was equal to raw rubber curdled from jarrah trees, but due to the work-intensive separation method and small crops, rubber dandelion was not considered profitable. One ton of rubber would have required a plantation area of 10 hectares. The rubber dandelion experiment ended in 1947.

Image: The main raw materials for tyres are natural rubber, synthetic rubber, carbon black and oil. Approximately half of the rubber used in modern tyres is still natural rubber. 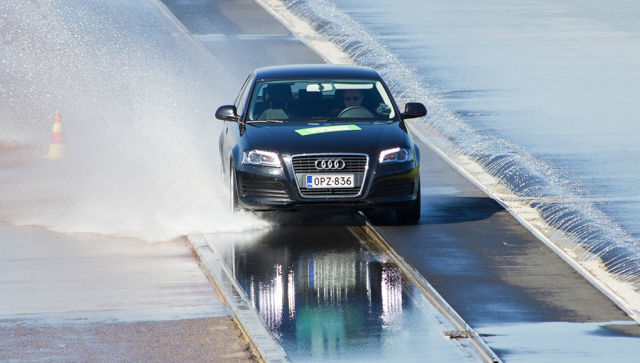 The nearest testing centre of the company is located around the corner from the Nokian Tyres headquarters. The test track in Nokia was originally built in the 1960s, and has now expanded to 30 hectares in size. One of the latest expansion was completed in 1999, and it brought variety especially to the high-speed tests. Testing in Nokia is performed from spring to late autumn. In addition to the versatile handling tracks, product development engineers have access to an automatic rain-making system and a high speed camera, for example. Nokian Tyres is also a pioneer in slush testing. Slush planing tests for started on the Nokia track already in 1996. 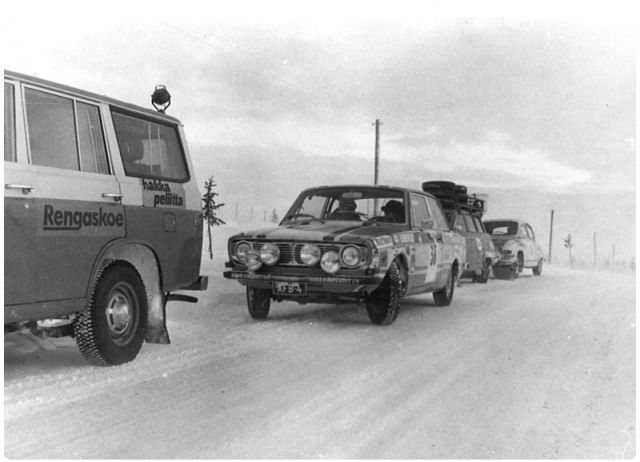 Testing winter tyres in actual conditions is an essential condition for product development. Throughout its history, Nokian Tyres has taken advantage of the Finnish weather and demanding winter conditions. Starting from the 1930s, the Hakkapeliittas were mainly being tested around Nokia. In the 1970s, the testers and their cars started moving further north. Each winter, suitable test conditions were sought at different locations. This always involved heavy transport and establishing a testing base, and the weather and testing opportunities could change at any time.

The opening of the Ivalo Testing Center in 1986 opened up new possibilities for the long-term study of the winter properties of tyres. Across the 700-hectare area of the world’s northernmost tyre test centre, the Hakkapeliittas are tested by means of acceleration and braking, demanding snow and ice track driving and uphill acceleration. The test season in Finnish Lapland lasts from October to May.

Image: Winter testing on the northern snow. Before a test centre was established, suitable conditions had to be found again, year after year. 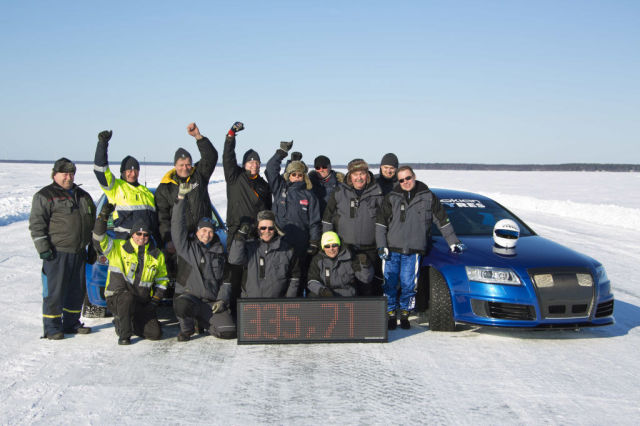 In recent years, Nokian Tyres has dominated the world records for the fastest car on ice. Test driver Janne Laitinen clocked the latest record of 335.713 km/h (208.602 mph) in March 2013 on the ice of the Gulf of Bothnia, near Oulu.  The car was an Audi RS6 equipped with Nokian Hakkapeliitta 8 studded tyres. At the record speed, the car travelled over 93 metres per second. The earlier record was also set by Laitinen: 331.61 km/h (206.05 mph).

According to the definition of the Guinness World Records organisation, the world record for the fastest car on ice is determined by measuring the time spent on a one-kilometre track, both ways and with a flying start. The world record is the average of these readings. The ice must be natural, and it must not be roughened or treated with chemicals. The tyres must be commercially available and approved for road use.

Nokian Tyres also holds the world record for the fastest electric car on ice: 252.09 km/h (156.67 mph) – also driven by Janne Laitinen. This top speed was achieved with the E-RA electric car in cooperation with the Helsinki Metropolia University of Applied Sciences in March 2012.  The record was run in Inari on the ice of Lake Ukonjärvi with Nokian Hakkapeliitta 7 studded tyres.